The Path of the Law

Look Inside This Book
And Buy Now From Amazon 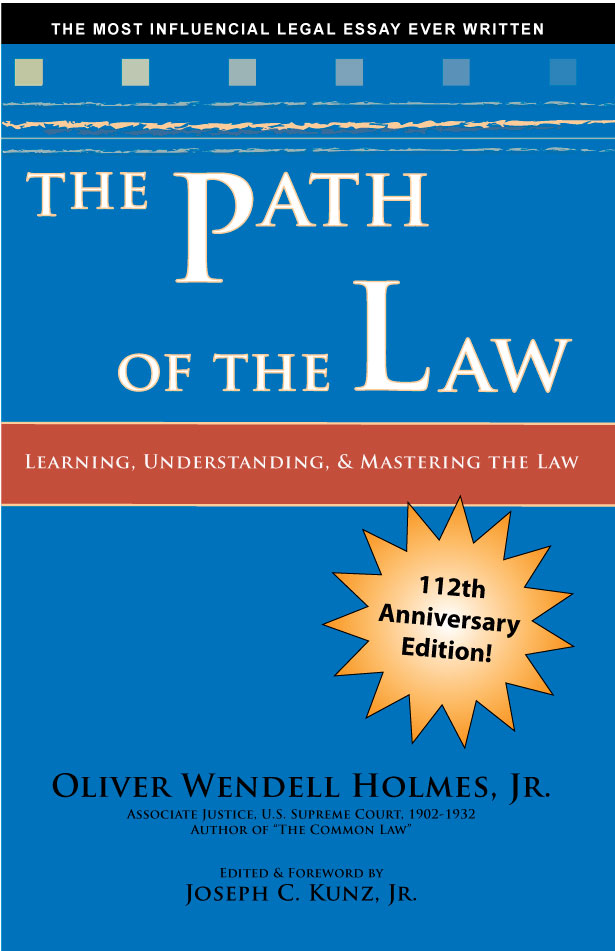 Description
The Path of the Law was written by Oliver Wendell Holmes, Jr. when he was 56, and originally published in the Harvard Law Review in 1897. Holmes delivered this essay as a speech at the Boston University School of Law dedication of the newly built Isaac Rich Hall. Holmes was involved in law for approximately 33 years by the time he wrote this essay.

Our 2009 112th anniversary edition of The Path of the Law is the first in history to be made into a student friendly edition with a comprehensive appendix. This appendix makes reading and studying this book much easier and much more enjoyable. A modern law student can learn much more from Holmes with our edition than any edition published before in history. 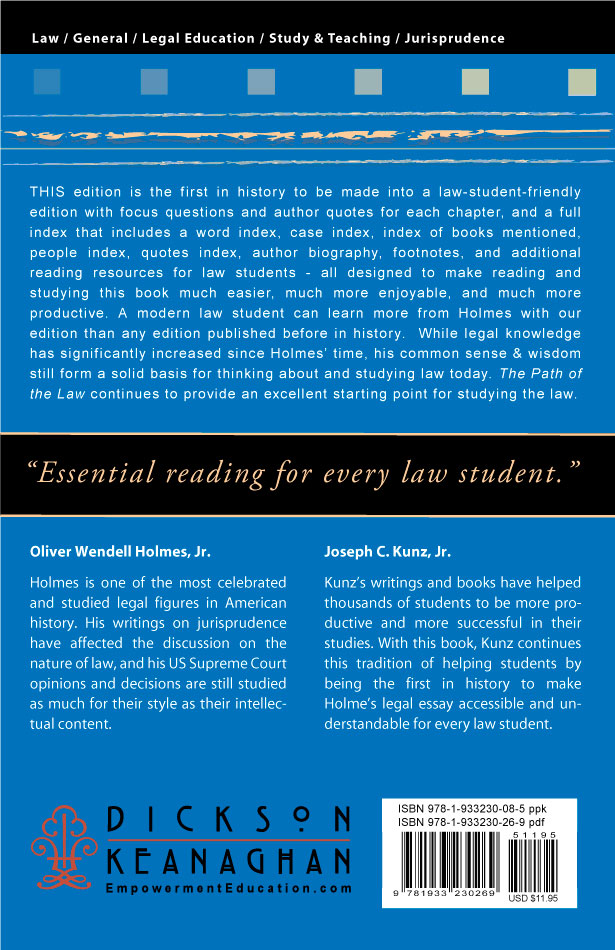 Special Features Used in This Book

Section Headings
These descriptive headings break the book down into manageable sections for reading and for discussion.

Focus Questions
Key questions to prepare the reader for the concepts addressed in each chapter. A short list of questions is highlighted at the beginning of each chapter.

Glossary
Legal and non-legal terminology used throughout the book are defined to help the reader better understand and learn more. These difficult and obscure words and terms are underlined throughout the text and defined in the glossary.

Quotes
Important and interesting quotes from the author are highlighted in every chapter.

Word Index
The reader will have no trouble finding any of the important subjects mentioned in the book.

Foot Notes
Used throughout the text.

Additional Sources
Extensive listing of the best books and websites related to the book’s topic are listed for further exploration.

From The Introduction
This book is pragmatical, not philosophical; a practical manual, not a treatise upon theories. It is intended for the men and women whose most pressing need is for money; who wish to get rich first, and philosophize afterward. It is for those who have, so far, found neither the time, the means, nor the opportunity to go deeply into the study of metaphysics, but who want results and who are willing to take the conclusions of science as a basis for action, without going into all the processes by which those conclusions were reached.

It is expected that the reader will take the fundamental statements upon faith, just as he would take statements concerning a law of electrical action if they were promulgated by a Marconi or an Edison; and, taking the statements upon faith, that he will prove their truth by acting upon them without fear or hesitation. Every man or woman who does this will certainly get rich; for the science herein applied is an exact science, and failure is impossible. For the benefit, however, of those who wish to investigate philosophical theories and so secure a logical basis for faith, I will here cite certain authorities.

The monistic theory of the universe is the theory that One is All, and that All is One; that one Substance manifests itself as the seeming many elements of the material world – is of Hindu origin, and has been gradually winning its way into the thought of the western world for two hundred years. It is the foundation of all the Oriental philosophies, and of those of Descartes, Spinoza, Leibnitz, Schopenhauer, Hegel, and Emerson. The reader who would dig to the philosophical foundations of this is advised to read Hegel and Emerson for himself.

In writing this book I have sacrificed all other considerations to plainness and simplicity of style, so that all might understand. The plan of action laid down herein was deduced from the conclusions of philosophy; it has been thoroughly tested, and bears the supreme test of practical experiment; it works. If you wish to know how the conclusions were arrived at, read the writings of the authors mentioned above; and if you wish to reap the fruits of their philosophies in actual practice, read this book and do exactly as it tells you to do.

About The Author
Holmes is one of the most celebrated and studied legal figures in American history. His writings on jurisprudence have affected the discussion on the nature of law, and his US Supreme Court opinions and decisions are still studied as much for their style as their intellectual content.